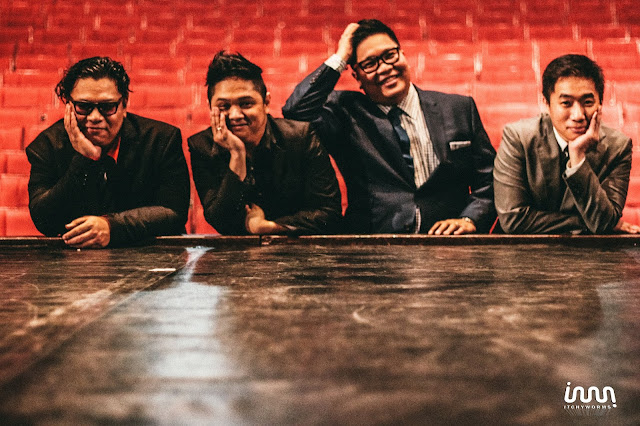 Jazz Nicolas, Chino Singson, Jugs Jugueta, Kelvin Yu
Di Na Muli was written in 2016 by long-time friends Jazz Nicolas and Wally Acolola. They entered the song into the 5th Philippine Popular (PhilPop) Music Festival, performed by The Itchyworms, where it won the grand prize. Now, in 2018, the song has been given new life in the official soundtrack of the hit film Sid & Aya (Not A Love Story) (Viva Films, starring Dingdong Dantes and Anne Curtis, directed by Irene Villamor).
Somewhere in between PhilPop and Sid & Aya, the Itchyworms set out to immortalize the song. The result was a visually stunning and emotional music video, directed by Paolo Abella. Help also came along in the form of the video’s co-director Juno Oebanda, longtime friend of the band, and the generous indulgence of none other than the Cultural Center of the Philippines. The link to the CCP is Teddy Hilado (d. 2015), recognized as the father of lighting design in Philippine theater, who is also the uncle of Oebanda.
The song’s themes of love, loss, and words left unspoken, are embodied in the elegant performances of Rosky Balahadia Hilado (Teddy’s widow, formerly of the Bayanihan Philippine Dance Company) and Carissa Adea (Ballet Philippines), and in the video’s sweeping visuals, all captured within the hallowed halls of the CCP. The music video seeks to serve as loving tribute to Teddy, whose influence is still felt and recognized to this day.

The Itchyworms are now proud to share what is probably the first-ever music video shot inside the Cultural Center of the Philippines, and extend heartfelt thanks to those who helped bring the music video to fruition.

Watch the Di Na Muli official music video here:
For updates about The Itchyworms, you can follow them on Facebook, Twitter, and Instagram.
Listen to the music of The Itchyworms on Spotify, Deezer and iTunes.
Check out their music videos: Official Youtube channel
Video Credits
Di Na Muli
Words and Music by Jazz Nicolas and Wally Acolola
- Advertisement (300x250) -

The administration and staff of the Cultural Center of the Philippines