Kevin Belingon, Andrew Leone headline ‘ONE: Heroes of Honor’ in Manila on April 20 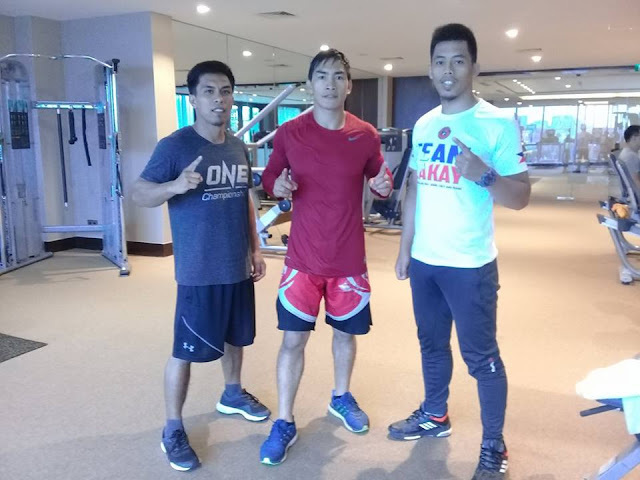 Kevin Belingon, Eduard Folayang, Honorio Banario (Facebook/Kevin Belingon)
14 March 2018 – Manila, Philippines: The largest global sports media property in Asian history, ONE Championship™ (ONE), has just announced ONE: HEROES OF HONOR, set for 20 April at the Mall of Asia Arena in Manila, Philippines. Fans will once again be witness to another evening of world class martial arts action, delivered by the absolute best in local and international martial arts talent. In the main event, hometown favorite Kevin “The Silencer” Belingon of the Philippines takes on Andrew Leone of the United States. In the co-main event, kickboxing superstar Giorgio Petrosyan of Italy faces “Smokin’” Jo Nattawut of Thailand in a ONE Super Series bout.

Launching at ONE: HEROES OF HONOR is the highly-anticipated ONE Super Series, a celebration of the world’s most effective striking arts, and invites the very best martial artists from Muay Thai, kickboxing, karate, taekwondo, wushu, sanda, and more to showcase their skills on ONE Championship’s global media platform. ONE Super Series was created to showcase the adrenaline-pumping action of world-class martial arts on the world’s biggest and most prestigious stage of competition, designed to showcase the purest forms of world-class striking.

Ticket information for ONE: HEROES OF HONOR is available at www.onefc.com.

Kevin “The Silencer” Belingon of the famed Team Lakay in Baguio City, Philippines, is one of the country’s most talented martial artists. With a professional record of 17-5, the Filipino champion and former world title challenger is known as a fierce competitor with the ability to finish opponents in a variety of methods. The 29-year old wushu stalwart owns seven huge knockouts on his resume, and is one of the most feared strikers in ONE Championship’s deep bantamweight division. In his last bout, Belingon took a unanimous decision victory over South Korean-American opponent Kevin Chung. Belingon now takes on Andrew Leone in the main event of ONE: HEROES OF HONOR.

Andrew Leone of Cortland, New York, is a 28-year-old top contender in ONE Championship’s deep bantamweight division. He trains alongside some of the most talented martial artists in Asia at the renowned Bali MMA gym in Bali, Indonesia. A winner of three of his last five bouts, Leone faced ONE Bantamweight World Champion Bibiano Fernandes in his most recent bout. He is now seeking to get back into title contention, and a victory over his next opponent could put him right back in the title mix. In his next bout, Leone takes on crowd favorite Kevin Belingon.

32-year-old Giorgio Petrosyan of Italy is known as the doctor due to the surgical precision of his strikes. He is considered the greatest kickboxer of his generation. Petrosyan began his professional Muay Thai career at the age of 16 competing between bantamweight and middleweight, winning multiple titles across each division. He sports a professional kickboxing record of 85-2-2, 2NC and is known for his incredible 6-year 42-bout win streak which is considered one of the most dominant reigns in middleweight history. Petrosyan will face Jo Nattawut in his ONE Super Series debut.

“Smokin” Jo Nattawut of Korat, Thailand is a 25-year-old kickboxing star from Atlanta, Georgia with a professional kickboxing record of 60-11-2. A two-division Lion Fight Champion and WMC Champion, Nattawut is known for his powerful kicks and ultra aggressive style, which always provides fans with exciting matchups. Nattawut will make his ONE Super Series debut opposite global superstar Giorgio Petrosyan.

Team Lakay’s Honorio “The Rock” Banario has long been one of the Philippines’ most respected martial arts veterans. His tremendous cage experience has brought him all over Asia in many memorable battles against top divisional talent. Among his many skills, Banario’s strength lies in striking, although he has recently exhibited a vastly-improved grappling game. The former ONE Featherweight World Champion, Banario is ready to once again showcase his world-class wushu skills and lightning-quick strikes against Adrian Pang.

Adrian “The Hunter” Pang is a martial arts veteran from Queensland, Australia, with a 22-11-2 professional record. The veteran Pang has decimated opponents with his incredible power and no-frills approach to striking in nearly two decades as a professional. He is known for his astounding durability and overwhelming strength, with the ability to walk through opponents with little to no resistance. Pang will need to muster all of his strength however, when he takes on fellow veteran and former champion Honorio Banario in his next appearance inside the ONE Championship cage.

Nong-O Gaiyanghadao is considered by Thai boxing purists as one of the top pound-for-pound Muay Thai practitioners in the world. He is a four-time Lumpinee Stadium champion, a Rajadamnern Stadium champion, two-time Thailand national champion, and two-time Fighter of the Year. He is also a five-division world champion in the sport. Nong-O is known for the incredible speed, power and precision behind all his strikes. He will make his ONE Super Series debut against Fabio Pinca.

Fabio Pinca is a French-Italian and highly-decorated kickboxer known for his technical and precise offensive style. He is a welterweight who hails from Lyon – Saint-Fons, France, and was a former French Muay Thai champion, WPKC European Kickboxing Champion, WBC World Muay Thai Welterweight Champion, and Rajadamnern Stadium champion. Pinca makes his ONE Super Series debut opposite Nong-O Gaiyanghadao.

Marat “Cobra” Gafurov of Dagestan, Russia, is the former ONE Featherweight World Champion. An martial artist with 15 wins and only one loss, Gafurov is a high-level grappler with 11 of his wins coming by impressive submission over top-caliber opponents. A Brazilian jiu-jitsu black belt, Gafurov captured the featherweight title in 2015 with a gutsy victory over former champion Narantungalag Jadambaa in an epic battle. In his last bout, Gafurov suffered a shock defeat at the hands of now reigning champion Martin Nguyen. Gafurov would like nothing more than to regain his championship mettle, and in his next bout will be taking on Emilio Urrutia.

Emilio “The Honey Badger” Urrutia is an American martial arts talent from Miami, Florida. The 31-year old made his professional debut in 2013, and has since produced a solid 11-4 record. He is the former SFC Bantamweight Champion. A skilled grappler, four of Urrutia’s 11 total victories have come by submission. In his last bout, Urrutia continued his winning streak in ONE Championship with a knockout victory over Bruno Pucci. Training out of Thailand, Urrutia looks to continue his run through the featherweight ranks and will take on former ONE Featherweight World Champion Marat Gafurov next.

Regian “The Immortal” Eersel is the former Lion Fight Welterweight Champion from the Netherlands representing Sityodtong gym. He is a kickboxing and Muay Thai stylist known for his all powerful brand of Dutch Muay Thai, combined with excellence of execution. Eersel will be taking on Brad Riddell in his ONE Super Series debut.

Top Filipino women’s martial arts contender Gina “Conviction” Iniong of Baguio City, Philippines, is a six-time national wushu champion and member of the renowned Team Lakay. She owns a professional record of 6-3, with four of her six victories coming by thrilling finish, including two highlight-reel submissions and two knockouts. In her last bout, Iniong took top talent and Japanese martial arts veteran Mei Yamaguchi to the distance, falling by unanimous decision. Iniong will look to regain her winning form as she takes on former world title challenger Jenny Huang next.

27-year-old Jenny Huang is a female martial arts athlete who represents Chinese Taipei. Highly-regarded as one of the most skilled female talents in ONE Championship, Huang sports a professional record of five wins and two losses. In March of 2017, Huang challenged Singapore’s Angela Lee for the ONE Women’s Atomweight World Championship. Of her five victories, Huang owns three via impressive submission. In her next bout, Huang is seeking redemption, but she will have to defeat the Philippines’ Gina Iniong to achieve it.

Japanese martial artist Masakazu Imanari is a ONE Championship bantamweight with years of high-profile experience on the global stage of martial arts. With nearly two decades of experience under his belt, Imanari is a veteran of the sport and one of the most talented competitors to come out of Japan. With a style focused on submission grappling, Imanari is a former 3-time DEEP Champion. Out of Imanari’s 36 total victories, 25 have come by submission finish. “Ashikan Judan” is set to return to the ONE Championship cage against Kevin Chung.

Kevin “Oldboy” Chung is a 25-year-old South Korean-American martial artist who was born and raised in the United States. He began his amatuer career in his adoptive hometown of Centreville, Virginia, in 2010, and has since impressed with his spectacular performances inside the cage. Chung turned professional in 2015, and currently holds a perfect professional record of 4-1, with two of his four career wins having come by way of spectacular stoppage. Chung prides himself on being an exciting competitor, willing to please the crowd by constantly seeking the highlight-reel finish. He is set to face feared Japanese veteran Masakazu Imanari next.

24-year-old Adrian Matheis of Jakarta, Indonesia, is a martial artist competing in ONE Championship’s talented strawweight division. In the ONE: TITLES & TITANS strawweight tournament in August 2016, Matheis defeated both Rustam Hutajulu and Roso Nugroho via scintillating knockouts in one night to be crowned tournament champion. In his most recent outing, Matheis finished the tough Eddy Kalai via first round submission. In his next bout, Matheis crosses paths with Lan Ming Qiang.

Lan Ming Qiang is a national sanda champion from China, who trains alongside ONE Championship flyweight standout “The Southern Eagle” Ma Hao Bin at the Jincan Defense Club. After a 16-2 sanda record and several championship titles, the 24-year-old native of Guangxi, China recently made his transition to the cage and already has a pair of stunning victories to his credit. In his most recent bout, Lan faced the former world title challenger Joshua Pacio, and is set to make his next appearance at ONE: HEROES OF HONOR in Manila against Adrian Matheis.