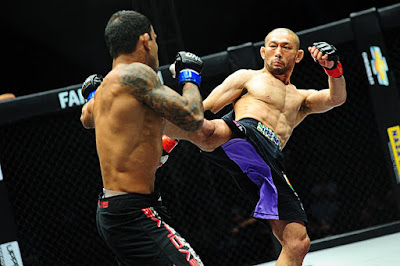 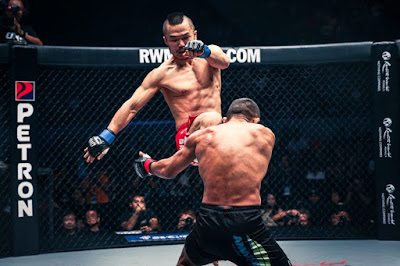 Dae Hwan Kim
PRESS RELEASE
Relations between Japan and South Korea have been strained ever since the Second World War, spilling over into other territories such as sports.
In the constantly-growing world of martial arts, the patriotic rivalry between these two nations has played itself out in rings or cages across Asia for almost two decades.
Several traditional forms of martial arts could trace its origins in Japan, but many people tend to forget that the country likewise served as one of the starting points of mixed martial arts.
Japan was once considered the apex of modern-day mixed martial arts. In the early 1990’s, the sport was growing all over the world as several locations across the globe were beginning to lay the foundation.
With Brazil and the United States indoctrinating the beauty of style versus style in the west, the sport’s stomping ground in the eastern hemisphere was in Japan.
Japan has a strong history of mixed martial arts as the country has given birth to heaps of legendary promotions such as Pancrase, Shooto, DREAM and PRIDE.
From fearless strikers to elite submission grapplers, Japan also provided the sport with a long list of extraordinary talents.
Meanwhile, South Korea sparked its own mixed martial arts renaissance in 2003 with the establishment of the now-defunct Spirit Martial Challenge.
Since having its first local mixed martial arts organization through Spirit Martial Challenge, the sport in South Korea has grown in leaps and bounds, paving the way for the founding of the locally-loved Road Fighting Championship and the influx of homegrown competitors.
Combatants from Japan and South Korea have shared the battlefield on numerous occasions as both countries are staking their claims as the ultimate powerhouse of mixed martial arts in Asia.
The Japan-South Korea rivalry will be rekindled on 20 April as Masakazu Imanari is slated to take on former world title contender Dae Hwan Kim inside the five-rope ONE Championship ring.
Both men are set to face each other on the undercard of ONE: HEROES OF HONOR, which takes place at the 20,000-seater SM Mall of Asia Arena in Manila, Philippines.
For the past 18 years, Imanari has carved a niche for himself in the world of mixed martial arts as the Japanese warrior rose to prominence by becoming a three-time titleholder in Deep and is famously known for his moniker “Ashikan-Judan,” which translates to “Master of Leglocks.”
With a style focused on submission grappling, Imanari has 36 career victories, 25 of which have come by submission finish.
After falling short in his much-awaited ONE Championship return last January against Yusup Saadulaev, Imanari plans to redeem himself by claiming a big win over Kim.
“I think I will make a big statement, and this win will be a big one,” Imanari guaranteed. “It’s Japan versus South Korea. I can’t lose this match. I have to win this.”
In the other corner, Kim has won multiple national titles in various martial arts disciplines and is regarded with his incredible striking prowess and solid grappling ability
The 31-year-old Korean dynamite joined the promotion in 2013, posting impressive victories over Thanh Vu and Kevin Belingon in his first two assignments under the ONE Championship banner.
Like Imanari, Kim’s back is against the wall as he lost his last two outings, yielding to Leandro Issa this past November before suffering a disqualification defeat at the hands of Daichi Takenaka.
With a professional record of 12-3-1, Kim seeks to break his losing spell at the expense of Imanari.
“Manila is passionate about martial arts. I fought in Manila twice, and I enjoyed it so much. On April 20, they are going to witness an intense rivalry between South Korea and Japan. They’ve never seen anything like it. It will be a battle, and I want to win it,” Kim said.
While Kim respects his Japanese opponent’s accomplishments, he simply believes that his skills are on a higher level.
“He is definitely a strong warrior, but I am a stronger warrior, and I will be a historical warrior,” Kim warned. “I think I can grapple with him, but I will proceed with a standing match. I will knock him out.”
Meanwhile, Imanari embraces the challenge that Kim is expected to bring at ONE: HEROES OF HONOR on 20 April.
“He is not a man to be taken lightly. He is dangerous, but I am looking forward to it. At 42 years old, I am still here to compete. What I have here still excites me. Definitely, I am going to give him a tough night,” Imanari stated.
​
​For more updates on ONE Championship, please visit www.onefc.com, follow us on Twitter and Instagram @ONEChampionship, and like us on Facebook at https://www.facebook.com/ONEChampionship.​  ​