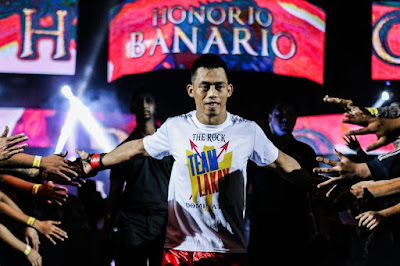 After scoring a one-punch knockout that was heard around the world, former ONE Featherweight World Champion Honorio “The Rock” Banario is set to make his much-awaited return to action on 20 April.
Banario is slated to duke it out with Australian veteran Adrian “The Hunter” Pang on the undercard of ONE: HEROES OF HONOR, which takes place at the 20,000-capacity SM Mall of Asia Arena in Manila, Philippines.
“I am back! It’s exciting because this will be my first bout in 12 months. I miss everything about competing. It’s an honor because my comeback bout will happen on Philippine soil. Big things are ahead of me,” he expressed.
The 28-year-old native of Mankayan, Benguet never entertained the idea that his best days were behind him as after losing five bouts in a row from 2013 to 2015.
Proving that he could bring back the glimmer in his professional career, Banario has won four-straight matches, including two spectacular finishes in his last two outings.
In April 2017, Banario showcased another epic performance, stopping ONE Championship debutant Jaroslav Jartim with a single left hook.
Countering a body kick with a punching combination, Honorio unleashed a left hook that landed square on Jartim’s jaw, turning the lights out immediately for his Czech opponent.
It was Banario’s first real knockout victory since he stopped compatriot Andrew Benibe at ONE: PRIDE OF A NATION in August 2012.
“That win was so memorable. It was all muscle memory because in training, the left hook is always my go-to move. It landed flush during the match. I went home with a big smile on my face,” Banario recalled.
Following four stellar victories since transferring to the stacked lightweight bracket, another win could elevate Banario to title contention for the ONE Lightweight World Championship, which is currently in the possession of two-division kingpin Martin Nguyen.
However, a tough test in the form of Pang awaits Banario at ONE HEROES OF HONOR, which is headlined by his Team Lakay comrade Kevin Belingon taking on American contender Andrew Leone.
Pang, who hails from Brisbane, Australia, is a perennial lightweight competitor famous for his extreme toughness and has walked through opponents with his overwhelming power.
In addition to being a Brazilian Jiu-Jitsu black belt, Pang is regarded as a hard-hitter who is known for dropping foes with a single punch.
Although Pang is already 40 years old, Banario believes that his Australian opponent remains as a formidable counterpart due to his vast martial arts experience.
“Even if he is up there in age, he has not appeared to have slowed down. He is still very strong, and he has the experience of a veteran, which is very tough to deal with,” he acknowledged.
However, Banario likes his chances against Pang as he believes that his size advantage will play a pivotal role in their lightweight clash.
“I have a better cardio than he does, and I am a little taller than he is, so I am going to use that to my advantage. I am young, and I am strong, so I feel very confident that I can outlast him, conditioning-wise. In terms of skill, however, we are very even. We have a similar skill set,” he explained.
According to Banario, if he can defeat Pang in convincing fashion, it will be the biggest triumph of his pristine run as a lightweight.
“Ever since I moved up to lightweight, I feel so much stronger. This is my natural fighting weight. I am a lightweight fighter. I just feel reinvigorated. My punches and kicks are powerful, my body is sturdy, and my mind is strong,” he stated.
“I feel as though the momentum is still on my side. I want to continue what I started,” Banario added.
With ONE Championship housing high-caliber lightweights such as Pang, Eduard Folayang, Ev Ting, Amir Khan, Timofey Nastyukhin, Ariel Sexton and Shinya Aoki, Banario asserted that his main objective is to elevate his status in the weight class’ rankings.
“I’m a hundred percent ready to go back in there again. I will fight anyone who stands in front of me. I have no problem if it’s a big name or a small name in this division. What’s important is that I stay active and improve my rankings,” he ended.
​