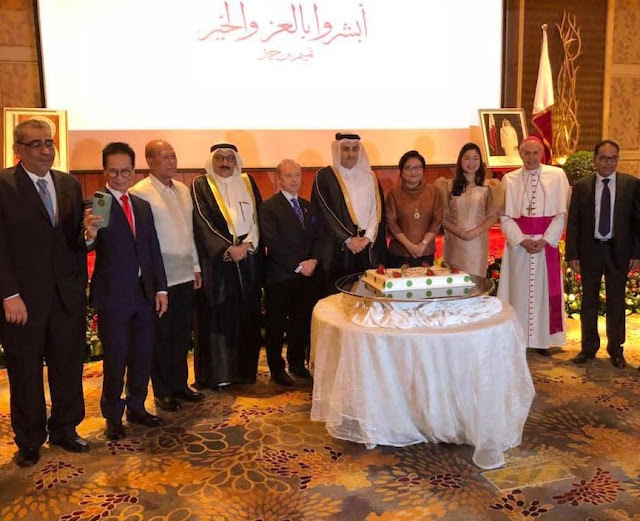 On December 11, 2017, the State of Qatar celebrated its National Day a week in advance at Makati Shangri-La Hotel to commemorate its First Ruler, Sheikh Jassim Bin Mohamend Bin Thani, with the theme of “Promise of Prosperity and Glory.” The reception was attended by foreign dignitaries and government officials such as Sec. Delfin Lorenzana, Chief Legal Counsel Sal Panelo, Taguig Mayor Lani Cayetano, among others.

“The ties between the Philippines and Qatar are going very well,” Qatar Ambassador Ali Ibrahim Al Malki said during the event. “This year in April, President Duterte visited Qatar and both sides signed new agreements, we are also currently working on other agreements right now.  We are expecting this relationship to go ahead with more enhancements in the field of investment, as well as political cooperation.”

“Qatar now has more than 240,000 Filipino workers and they are enjoying the privilege of the Qatari government,” the Ambassador continued. “They are also our partners in development, and we are looking forward to an even stronger relationship.  And because of the FIFA World Cup 2022, we now require additional supply of manpower from the Philippines.  We also see Filipino workers as one of the best in the world, very professional, educated and talented.”

Qatar’s Foreign Minister HE Sheikh Mohammed bin Abdulrahman Al-Thani mentioned the 2022 FIFA World Cup in his address to the United Nations General Assembly in New York in September. He said that the event is “a first and foremost opportunity for the Arab world and the Middle East to highlight the true and peaceful nature of the rest of the world.”

“It also gives the State of Qatar a great opportunity to stimulate innovation, positive change and sustainable development,” His Excellency continued. “The State of Qatar is currently building 8 stadiums, 64 training grounds, 5 fan areas and accommodation, as well as major infrastructure developments including roads, railways and airports. The World Cup is an occasion to bring people together, overcoming geographical, religious, cultural and linguistic differences.”