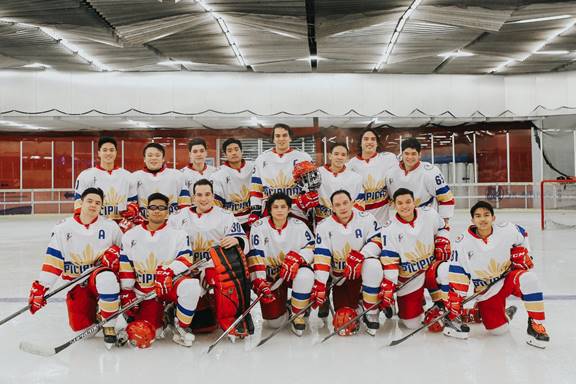 The Philippine Ice Hockey Team hopes to make the country proud as it competes against Thailand, Kuwait, Mongolia, and Singapore in the 2018 IHHF Challenge Cup of Asia at the SM Skating Mall of Asia. All Philippine team games are scheduled for 7PM.
The Philippines will host the 2018 Challenge Cup of Asia from April 3-8, 2018 at the SM Skating Mall of Asia in Pasay City. This is the first time that the country will sponsor the annual international ice hockey tournament that is sanctioned by the International Ice Hockey Federation (IIHF).
“We are very proud and excited to host, for the first time, the IIHF Challenge Cup of Asia which has been held in different countries since it was founded in 2008,” said Chris Sy, Federation of Ice Hockey Philippines president.
The 2018 Challenge Cup also marks the first time that the Philippines will compete in the men’s top division of the annual tournament among some of the best ice hockey teams in the region.
Riding on the momentum of its gold medal victory in the first-ever ice hockey event of the 2017 Southeast Asian Games, the Philippine Ice Hockey Team, backed by the SM Group, hopes to make a podium finish in the 5-nation Challenge Cup of Asia as it plays against Thailand on April 3, Kuwait on April 5, Mongolia on April 6, and Singapore on April 8. All games of the Philippine team are scheduled at 7PM.
Other Challenge Cup of Asia games will feature Singapore vs Mongolia on April 3 (3:30PM), Mongolia vs Kuwait on April 4 (7PM), Thailand vs Singapore on April 5 (3:3PM), Mongolia vs Thailand on April 7 (3:30PM), Kuwait vs Singapore on April 7 (7PM), and Kuwait vs Thailand on Aril 8 (3:30PM).
During the Challenge Cup, the Olympic-size ice skating rink at the SM Skating Mall of Asia will be the battleground of the competing ice hockey teams. It is equipped with complete facilities such as a digital scoreboard, players’ boxes, scorekeeper and penalty boxes, locker rooms, and a 200-seater stands located around the rink.
“We are honored to be a part of this wonderful opportunity to host the first official IIHF event in the country. This shows how the Philippines can truly be at par with its Asian neighbors not only in terms of the quality of its sports programs and athletes, but also in the quality of its sports facilities,” said Herman Medina-Cue, COO of SM Lifestyle Entertainment, Inc., the only company in the Philippines to carry Olympic size ice rinks.