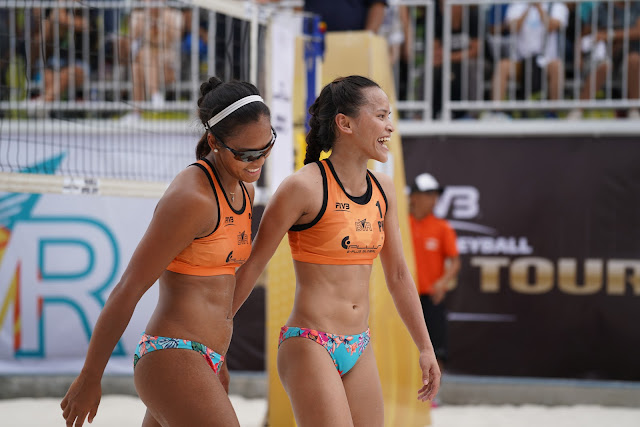 Dzi Gervacio, Sisi Rondina
PRESS RELEASE
Sisi Rondina and Dzi Gervacio became the last Filipina pair standing in the FIVB Beach Volleyball World Tour Manila Open, which is promoted by E-Plus Global Sdn Bhd and organized by Beach Volleyball Republic Inc. This was after a 21-17, 21-17 conquest of Canada’s Caleigh Cruickshank and Megan Nagy in the round-of-12 on May 5, 2018 at the Sands SM By The Bay in Pasay City, Metro Manila, Philippines.
With modest expectations of playing well against international, battle-tested sand court veterans, Gervacio was satisfied things went with her maiden partnership with Rondina in the one-star tournament.
“Ako, hindi ko talaga inii-expect na malayo ang mararating namin, na aabot kami ng Day 2 (I personally did not expect that we will get this far, that we will reach Day 2) kasi, ako (because I) personally, I haven’t trained internationally and I know for a fact na matatangkad ang kalaban natin (that our opponents are tall),” said Gervacio, one of Beach Volleyball Republic’s co-founders. “But from the get-go, noong nakalaban namin ang USA, alam ko may pag-asa tayo (when we fought against the USA team, I knew we had hope).”
Rondina and Gervacio compensated for the size disadvantage with solid defense in the sand and by playing smart.
It was Rondina and Gervacio’s second win in the one-star tournament following the 21-12, 21-16 conquest of the United States’ Lindsey Fuller and Kaley Melville at the women’s main draw opener on May 5, 2018. The duo somehow avenged the loss of their fellow Filipina bets Charo Soriano and Bea Tan to their Canadian opponents, 12-21, 15-21, in the losers’ bracket on the same day that eliminated them in the tournament.
Earlier, the Philippines’ other remaining hope, Lot Catubag and Karen Quilario of the PNP, bowed out after a heartbreaking 34-36, 23-25, 15-17 loss to Thailand’s Thatsarida Singchuea and Pawarun Chanthawichai. Catubag and Quilario were in match point late in the second frame and twice in the deciding set, but the pair from Tagum could not close out against the young Thai duo, the newly-minted Asian U19 beach volleyball champions.
“More teamwork and more practice,” Quilario said after the match. After Thailand went at match point, the Philippines needed a medical timeout as Catubag went down with cramps.
Eventually, Quilario returned to the sand. However, the Thais were able to complete the kill in the tournament’s most exciting match that sent every set to extension.
If given the chance to play more FIVB World Tour events outside the country, the reigning two-time Beach Volleyball Republic national champions are willing to join to gain more experience. Quilario said, “Gusto naming maglaro kahit saan para exposure na rin (We want to play anywhere to gain more exposure).”
“Kung bibigyan kami ng pagkakataon, iga-grab namin ang opportunity na maglaro ng ganitong level (If given the chance, we will grab the opportunity to play in this level),” Catubag added. “Maraming gustong maglaro pero bihira lang ang magbigyan ng pagkakataon sa ganitong competition (Many want to play but only a few are given the opportunity to play in competitions like this).”
In other round of 12 matches, Germany’s Lisa-Sophie Kotzan and Leonie Klinke prevailed over The Netherlands Katja Stam and Lisa Wouters, 21-11, 21-19, while the United States’ Lindsey Fuller and Kaley Melville beat Norway’s Janne Pedersen and Hanne Zylstra, 21-15, 21-17.
Men’s round-of-12 action saw Spain’s Javier and Alejandro Huerta upset Martin Appelgren and Simon Boman of top-seed Sweden, 24-22, 21-15, to make it to the quarters. Felix Friedl and Maximillian Trummer defeated Jorg Wutzl and Simon Fruhbauer in an all-Austrian duel, 23-21, 21-19.
Russia’s Petr Bakhnar and Taras Myskivsurge passed Chinese Taipei Wang Chin-Ju and Hsieh Ya-Jen, 21-14, 21-8. Australia’s Marcus Fegurson and Tom Dickson swept Hong Kong’s Kevib Lau Tsz Ho and Wong Pui Lam, 21-15, 21-15.