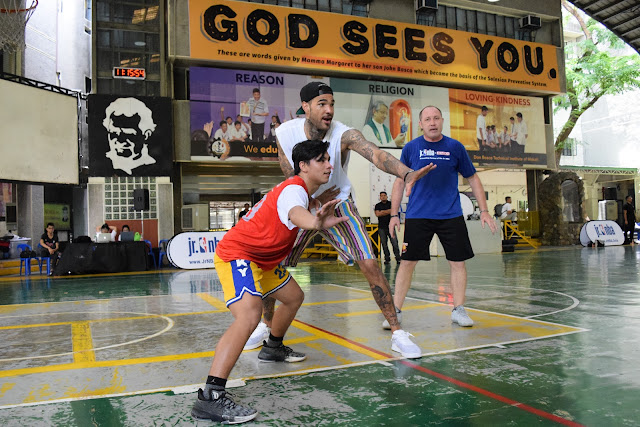 Willie Cauley-Stein (center), John Ramirez (first from the right)
PRESS RELEASE
NBA player Willie Cauley-Stein of the Sacramento Kings and former WNBA player Sheryl Swoopes are currently in the Philippines. The two basketball stars are among the coaches of the finalists of the 2018 Jr. NBA Philippines.
The National Training Camp presented by Alaska featuring 75 boys and girls aged 10 to 14 will be conducted at the Don Bosco Technical Institute in Makati City, Metro Manila on May 19, 2018. It will be conducted at the SM Mall of Asia Music Hall at the SM Mall of Asia Arena in Pasay City, Metro Manila on May 20, 2018.
As coaches at the Jr. NBA Alumni All-Star Game, Cauley-Stein and Swoopes will help identify the top eight boys and eight girls to be named as 2018 Jr. NBA Philippines All-Stars. The 2018 All-Stars will travel to Shanghai, China in October 2018 to attend NBA China Games 2018 featuring the Philadelphia 76ers and the Dallas Mavericks.
“Filipinos are among the most passionate basketball fans in the world and I’m eager to work with these dedicated young players who have earned the right to be chosen as Jr. NBA All-Stars,” Cauley-Stein said. “I’m excited to share my basketball knowledge and help the kids become the best version of themselves on and off the court.”
“Participating in sports and having proper nutrition are both integral parts of a child’s holistic development as it touches on physical, emotional and mental well-being,” Swoopes said. “Through the Jr. NBA program, I look forward to this opportunity to contribute to our goal of getting more kids, especially girls, to play the game of basketball and help them understand how working hard on their craft in the same way it opened doors for my career, can unlock greater opportunities in life.”
Cauley-Stein, selected sixth overall in the 2015 NBA Draft, was named to the NBA All-Rookie Second Team in 2016.  He averaged 12.8 points, 7 rebounds, and 2.4 assists with the Kings this season.
Swoopes is a four-time WNBA Champion, six-time WNBA All-Star, three-time WNBA MVP and an Olympic gold medalist.  Named as part of the WNBA’s Top 15 Players of All Time, Swoopes spent 12 seasons in the WNBA with the Houston Comets, Seattle Storm and Tulsa Shock prior to being inducted into the Naismith Memorial and Women’s Basketball Hall of Fame in 2016 and 2017 respectively.
The National Training Camp finalists were selected from Regional Selection Camps in Bacolod, Baguio City, Butuan and Metro Manila, and from the Alaska Power Camps in Manila and Subic. The search for the 2018 Coaches of the Year will also conclude at the National Training Camp, and the winning coaches will take part in the NBA experience trip with the Jr. NBA All-Stars.