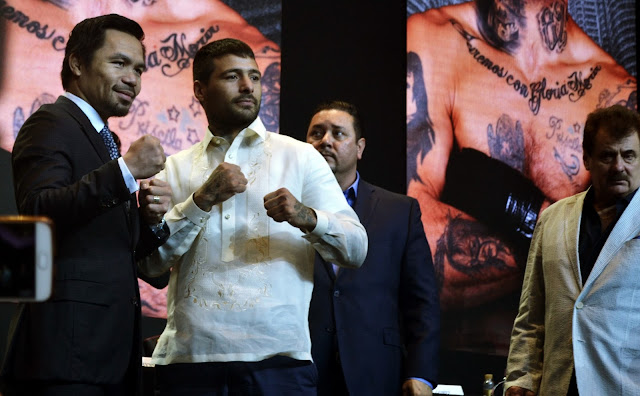 Manny Pacquiao, Lucas Matthysse, Eric Gomez, Mario Arano
PRESS RELEASE
MANILA–Filipino sports icon Manny Pacquiao rolled out the red carpet to Lucas Martin Matthysse at the start of the two-city press tour and challenged the Argentine for his World Boxing Association welterweight title at the City of Dreams Grand Ballroom Wednesday here.
As a new boxing promoter, Pacquiao welcomed first-time Manila visitors Matthysse and his team led by Golden Boy Promotions President Eric Gomez and Matthysse’s manager Mario Arano in a lavish and eventful press conference.
From being a promoter, Pacquiao transformed into Matthysse’s challenger that will headline the battle dubbed “Fight of Champions.”The glitzy 16,000-seat Axiata Arena in Kuala Lumpur will be the venue for the fight on July 15 (July 14 in the US), which will also feature three other world championship title fights.
Pacquiao was all business in bidding to win an unprecedented 11th world title and vowed to give it all for his boxing fans around the world. The 39-year-old fighter from Sarangani province broke all records by becoming the only boxer in history to have won titles in eight different weight divisions from 112 lbs. to 152 lbs.
Pacquiao and his MP Promotions company is hoping to equal if not surpass the expectations leading to the epic Muhammad Ali-Joe Bugnerre match which was also held in Kuala Lumpur, Malaysia 43 years ago.
The press tour shifts to Kuala Lumpur on April 20.
“We are excited to showcase to our Malaysian brothers a roadshow that hopes to match the excitement of the Ali-Bugner fight in 1975,” added Pacquiao.
Matthysse is a 35-year-old champion nicknamed “La Maquina,” who has displayed machine-like precision in beating 39 opponents, 36 of whom he knocked out–an amazing 92.3 percent demolition rate. He has lost four times only.
Not present is trainer Joel Diaz who is preparing training camp. Diaz has trained Timothy Bradley, whom Pacquiao has faced thrice in the past.
“This is the fight I have always wanted. The opportunity to fight a future Hall of Famer such as Manny “Pacman” Pacquiao inspires me to work harder than ever to earn a victory for my fans. I know that it will not be easy. But I will defend my title with honor and represent my country Argentina with pride,” said Matthysse.
Pacquiao was with his long-time trainer Restituto “Buboy” Fernandez. Watch the “Fight of Champions: Manny Pacquiao vs Lucas Matthysse” press conference here: