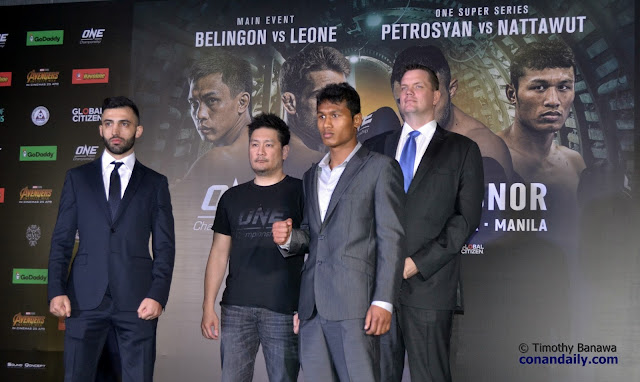 Giorgio Petrosyan, Chatri Sityodtong, Jo Nattawut, Kevin Benning
PRESS RELEASE
Making its highly-anticipated premiere at ONE: HEROES OF HONOR is the recently announced ONE Super Series. Chairman and CEO of ONE Championship, Chatri Sityodtong, broke the news about the new striking super-league a little over a month ago, promising to bring together the greatest talents in the world of striking under one umbrella.
The new league will be unveiled this Friday, 20 April, at the Mall of Asia Arena in Manila, Philippines.
ONE Super Series aims to provide the world’s best martial artists a prestigious global platform to showcase the beauty of Asia’s striking arts such as Muay Thai, kickboxing, karate, taekwondo, Kung Fu, wushu, sanda, silat, lethwei, and more.
This means that martial artists of varying striking backgrounds now have the chance to pit their skills against one another in a regulated, safe environment conducive to action and excitement.
Among the first to give fans a taste of all the action is global kickboxing superstar Giorgio “The Doctor” Petrosyan. Considered a true elite striker in the world of kickboxing, Petrosyan is known in circles as the ‘Michael Jordan of kickboxing’. The 32-year-old from Italy is one of the finest offensive talents in the sport, nicknamed “The Doctor” for his surgical precision and near-flawless technique.
With a professional kickboxing record of 85-2-2, 2NC, Petrosyan is known for his incredible 42-bout win streak which lasted for six long years. He is universally recognized as one of the most dominant world champions in middleweight history.
Standing across from Petrosyan in the ring will be Atlanta, Georgia-based Thai kickboxer ‘Smokin’ Jo Nattawut.
Nattawut is a former Lion Fight Super Welterweight Champion and WMC Champion known for his powerful elbow and knee strikes. The 25-year-old is a rising star who holds a professional record of 60-11-2. Against Petrosyan however, Nattawut will have his work cut out for him in dealing with a true legend in the sport.
Apart from the premise of bringing together the world’s greatest strikers, ONE Championship is also set to unveil a brand new five-rope ring designed specifically for ONE Super Series but will also be used in its standard Global Rule Set contests.
While the ONE Championship cage has remained the staple playing field for the promotion since its establishment in 2011, bouts will slowly transition into a ring-only format in the future, an homage to great Asian martial arts promotions of yesteryear.
Main event combatants Kevin “The Silencer” Belingon of the Philippines and Andrew Leone of Cortland, New York, USA, along with other martial artists on the card, will be also competing in the brand new stage, marking the first time in the promotion’s history that Global Rule Set bouts will be held inside the ring.
By design, ONE Super Series will provide fans with a dazzling carnival of martial arts disciplines, with the purpose of providing pure martial arts that favors action and excitement above all.
It’s an amazing new development from ONE Championship, who are leading the pack globally in terms of innovation and the development of martial arts as not just a sport, but also as a growing entertainment spectacle.