Nelly to perform live in Manila for the first time 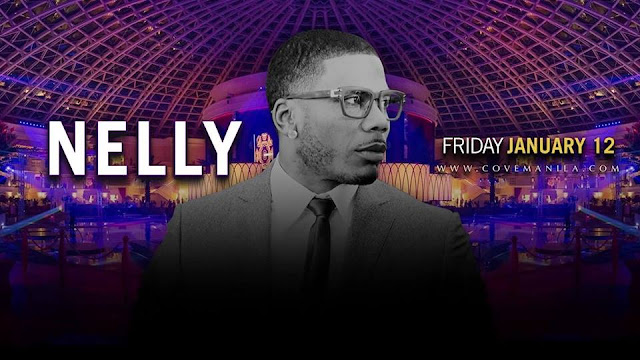 For the first time, rapper Cornell Iral Haynes Jr., who is professionally known as Nelly, is performing live in the Philippines. He will have a special show at Cove Manila, the largest indoor beach club and night club in Metro Manila located in Okada Manila, Atlantic Avenue, Parañaque.

The ticket is inclusive of entrance and one drink. Reservations can be made via Cove Manila’s website.

No details about Nelly’s set list were released. There are no announcements about Filipino artists performing with him, either.

One of Nelly’s first hit songs is the collaboration song “Dilemma” featuring Kelly Rowland. His other hit songs are “Hot in Herre,” “Heart of a Champion,” “Tilt Ya Head Back” featuring Christina Aguilera and “Get Like Me” featuring Nicki Minaj and Pharrell.

As an actor, Nelly played Terrence Davis in the series “CSI: NY” from 2008 to 2009 and E-Ruption in the 2014 drama film “Reach Me.” The rapper will play Officer Glen Donner in the upcoming mystery drama film “A Fall From Grace,” which will also star David Lynch, Forest Whitaker, Balthazar Getty, Cedric the Entertainer and Paz Vega, among others.

Watch the music video of “Hot in Herre” here: