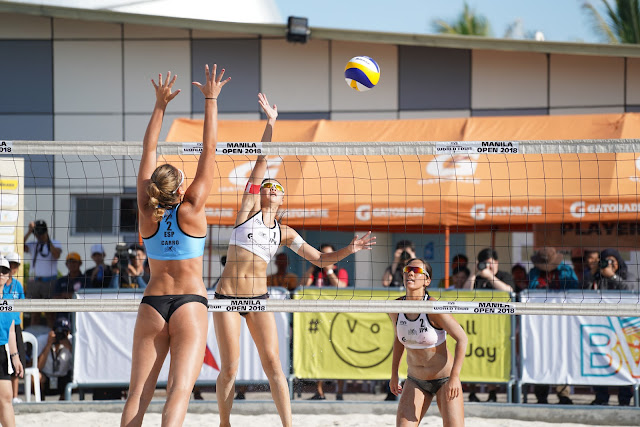 Ayumi Kusano, Takemi Nishibori
PRESS RELEASE
The Philippines proved to the world that it can host a magnitude of an event such as the FIVB Beach Volleyball World Tour Manila Open.
Beach Volleyball Republic co-founder Charo Soriano was delighted that as first-time hosts, the country was able to hold a successful international beach volleyball tournament.
“I’m very much humbled and very happy. It’s was very fulfilling to see the number of people watching and the amount of support that we are getting for beach volleyball — not only for the Philippine team but even for other athletes as well,” said Soriano.
Playing in front of a big appreciative crowd that packed Sands SM By The Bay, Japan’s Ayumi Kusano and Takemi Nishibori won their first World Tour women’s gold medal following a quick 21-14, 21-18 conquest of Spain’s Maria Belen Carro and Paula Soria in the final.
Germany’s Max-Jonas Karpa and Milan Sievers also snatched their first-ever FIVB World Tour men’s gold, beating Russia’s Petr Bakhnar and Taras Myskiv in come-from-behind fashion, 15-21, 23-21, 15-9.
Filipino fans were treated to and spoiled with world-class beach volleyball action in the four-day, one-star tournament.
“Hopefully this is the start. This can be the catalyst for what we really want, which is beach volleyball to be here in the Philippines. And it’s a sport for the masses talaga. A sport that people can enjoy and that everybody can learn to love as well,” Soriano said.
Among the four Filipina pairs that competed, Sisi Rondina and Dzi Gervacio advanced the most, making it to the quarterfinals. Meanwhile, reigning BVR national champions Karen Quilario and Lot Catubag secured a round-of-12 spot and were just a point away from advancing to the top eight. Both feats, Soriano considered to be a breakthrough for the sport in the country.
The Filipinas defied tremendous odds – especially with Rondina and Gervacio beating much taller and experienced pairs from the United States and Canada, and Quilario and Catubag, who pushed reigning Asian U19 champions Thailand to three extended sets before losing in a valiant effort.
“It’s a very momentous event, this one,” said Soriano, who herself competed along with Bea Tan. “First, because a lot of the Philippine teams really didn’t have programs prior to this event. We have BVR, we have regional tours, we have national championships. But in terms of having a proper national training pool program, it’s still non-existent. But despite that, we were able to garner wins in the first-ever FIVB tournament that we are entering as national team.
“Napakasaya po kasi we are very proud of the rest of the Philippine delegation. Even though our men’s teams didn’t really win, you can really see that they were competent. They were competitive.”
The FIVB World Tour is a good gauge for those vying for slots in future beach volleyball tournaments like next year’s Southeast Asian Games that the Philippines is hosting.
Soriano thanked Larong Volleyball sa Pilipinas Inc. acting president Peter Cayco and secretary-general Ricky Palou for their support and overseeing the event. The event is supported by Dataland, Dataland Residentials, The Olive Place, Rebisco, Creamline, Globe, Maynilad, Gatorade, Tryp and Hotel 101.
“We just need the proper support and of course, continous programs in time for SEA Games next year. That’s really the goal and that’s why we wanted to push for an international tournament as well in preparation for next year’s SEA Games,” said Soriano.
With the way the Manila Open has turned out, another one-star tournament in the coming years is not far fetched.
“For sure, it won’t be the last,” said Soriano. “Being the first-time hosts and speaking as an organizer, we had setbacks as well, we had problems, but nothing that teamwork cannot fix.”
The event is promoted by E-Plus Global Sdn Bhd and organized by Beach Volleyball Republic Inc.