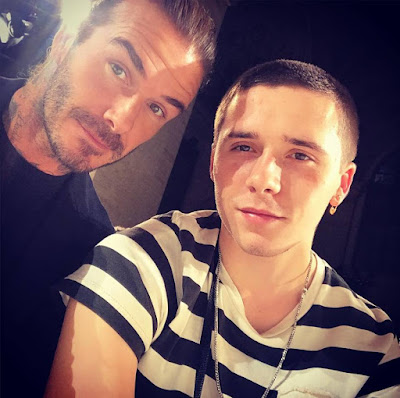 Brooklyn Beckham, 18, is set to attend an event in Manila. The event was organized by the Filipino clothing brand Bench, which is endorsed by the eldest child of David Beckham, 42, and Victoria Adams Beckham, 43.

On January 13, 2018, fans of Brooklyn will have the opportunity to see him in a signing session for his new book titled “What I See” at 4 p.m. at SM Megamall, Mandaluyong City and at 6 p.m. at SM Mall of Asia, Pasay City.

To be part of the book signing event, fans need to present a minimum single-receipt net purchase worth 1,500 pesos of regular-priced Bench items. This will enable them to buy the “What I See” book at 500 pesos only.

“What I See” marked Brooklyn’s debut as an author. It is a photography book that features pictures of him and photos he took along with captions and passages of texts he personally wrote.

Victoria gave birth to Brooklyn on March 4, 1999 and his younger brother Romeo James Beckham on September 1, 2002. The two boys were born in Westminster, London they are both godchildren of Elton John and Elizabeth Hurley.

Like David and Victoria, both Brooklyn and Romeo have done modelling work. The British couple’s three sons have played football in the Arsenal Academy.

Currently, Brooklyn is dating Chloe Grace Moretz, 20. The latter is set to star in at least four 2018 films namely “The Miseducation of Cameron Post,” “Suspiria,” “Red Shoes and the 7 Dwards” and “The Widow.”